Look back over your last year of projects and compare where you are in terms of skill and knowledge of your craft to this time last year. Have you learned any new skills or forms of knitting/crochet (can you crochet cable stitches now where you didn’t even know such things existed last year? Have you recently put a foot in the tiled world of entrelac? Had you even picked up a pair of needles or crochet hook this time last year?
Where to start here? This is not going to be some smug declaration of my fabulous level of skills. Instead, I'm thinking about how far I've come as the direct result of the knitting and crocheting community. I only learned to knit a couple of years ago, I actually meant to learn to crochet but I couldn't figure it out, worked out knitting and have since been convinced that crochet is witchcraft. (Ask my crochetting friend, I get very distressed when she shows me lace that took her 2 weeks in return for my 2 months of swearing and weeping).
I discovered Ravelry and with that, knit sibs. Within a few short weeks I went from laboured scarves and headbands to shawls, socks and more. Safe in the knowledge there was always someone there to help, I got adventurous. Discovering I could make a sweater was thrilling, discovering it fit, even more so. 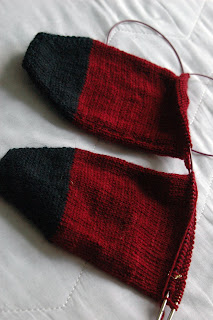 This week I've learned two at a time socks. I'm in love. No really. It started slowly, teeth were involved in wrangling the cord and unknotting the yarn but I am now the proud owner of two identical socks. I learned magic loop and socks pretty early on but was terrified of the thought of two at a time. It just seemed...... octopus level knitting?!? But I got there, and would recommend Silver's sock classes to anyone wanting to learn basic socks, two up, two at a time and so on. This is the joy that is our knit sibs- sharing information and techniques and then logging on to Ravelry to show off, congratulate and commiserate.
I'm aiming for knee highs. This may take a while.....
Posted by A Playful Day at 09:29

Ravelry is a pretty awesome place isn't it? I don't think I'd have got this far without it.

I would love to make over the knee socks, but I think I'll wait until my legs are thinner to start that project!

I love your description of two at a time socks as octopus knitting, I keep thinking I should try it but sneak back to my dpns each time I cast on

Two-at-a-time socks are my skill for this year as well! Octopus knitting. Awesome. I saw someone on ravelry knitting 6 at a time socks... truly octopus-ish.

I love Ravelry! I learned so many things there, I've made friends and there are always new things to discover! I can't imagine knitting without Ravelry!

Your socks look great! I haven't tried knitting socks like that, it looks interesting!

I remember Knitting before ravelry- it was so hard finding the information you needed!

Love the socks! The toes are adorable!

I agree: crochet is a witchcraft revealed only to the chosen ones! ;) I can only get ch, dc and tr. All the rest is just Greek to me.

Ravelry was certainly a game changer for knitters all over ht world, I definitely upped my skills due to ravelry as well!

I love socks, they're so much fun. But I've never done two at a time (or knee highs, for that matter), so kudos to you!

Two at a time toe-up on two circulars are on my to-learn list! I have made one pair top-down two at a time with magic loop - the first part truly was like wrestling with an octopus!

Be smug. Smug I say!

I'm impressed! I can't do anything two-at-a-time. I can never get them cast on right. :/

I have yet to attempt two-at-a-time. I can just see myself throwing things across the room and vowing never to knit again. Too risky!

I share your thoughts on crochet... that's some dark magic.