It all started with an effort to support my local library. For those of you who don't know, hundreds of libraries across England are under the threat of closure due to cuts. As with many of this current governments cuts, this is an ill thought out, and perhaps illegal move. Those of you following for a while, will know I've highlighted this threat mutliple times, its something I feel particularly strongly about. If you're an English reader, I urge you to support.
I realised that I might not be 'doing my bit' as I wasn't a member of my LOCAL library. I went in often, used libraries to study in but with so much fiction exploding from my own personal library, tended not to take out anything. I realised I was not thinking correctly, there are RECIPE books in there! So I marched in, joined, signed every petition I could (and made everyone else in the queue sign too) and withdrew some recipe books. 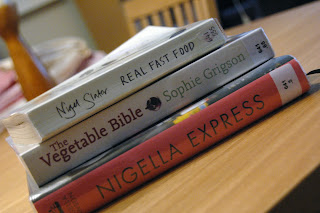 I gleefully read my way through Nigella Lawson's 'Express' and while I found myself rolling my eyes at another book containing 'jar of ready made sauce', I still believe this woman knows good food. Further into food heaven is Nigel Slater, my personal food hero. What I love about these food writers and chefs is their knowledge of food. I have started to really enjoy reading books about the subject of food, eating habits and so on. What Nigel and Nigella both manage is to convince you how fuss free food can be, not by stating 'It's simple' and listing 15 ingredients that the average family doesn't buy (hang your head in shame Mr Oliver) but by concentrating on the depth of flavour an ingredient can bring.
I felt inspired. 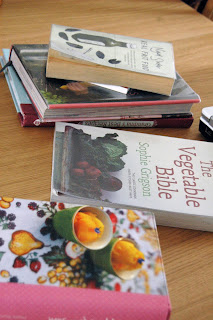 I 'reinvented' a cookie recipe to include some cinnamon chips a friend had sent me, reflecting on the flavours I really wanted. The chips are creamy, strong and moreish so a good vanilla cookie dough was all that was needed. There'll be a recipe later in the week, I promise.

Pausing for more tea in THAT mug, I then turned my attention to the much craved bread. I dabbled with a triple mustard recipe, adding a little extra yeast, checking mustard contents for sugar and salt, to make the perfect loaf.
Oh and for anyone who wants to know how I go about working out 'perfect recipes', my 'recipe goes like this:
1. Get comfort food (I am ashamed to say the fish and chip shop provided this)
2. Get drink (alcoholic or other)
3. Sink into sofa with mountains of recipe books, pen and favourite note pad.
4. Daydream about a certain flavour.
5. Research flavour, recipes and jot down a remixed recipe idea
I highly recommend this process. Although perhaps not with the chips if you're watching your weight. Ahem.

what a great idea on creating your own recipes!! And definitely it's important that people be a member and support their local libraries- I'm way over in Canada, but I always have at least 6 library books out, and there are often cookbooks in that list! so many great resources and you save a tonne of money by taking them out instead of buying them.

Oh, I love perusing my cookbooks! It feels like I'm going on a treasure hunt!

I flippin love Nigella, do you watch her show on Food Network? Nigella's Kitchen. She's amazing. I love how rustic and pure and clean her cooking it.

Now I'm hungry! I've been trying to plot out a decent Easter feast for my boyfriend and me. Thanks to your tips on making your own recipes (and the library! Who'd have thought!), I may have to give it a try!