Does anyone else have 'that' skein? Something so precious that you think you might never knit it? I'm NOT a hoarder. I loathe the idea of yarn sitting, unknit in people's stash, hunted via scary updates just to be sat, unused. I rejoice in yarn and intensely plan projects. But I have about 3-4 skeins that I cannot plan a thing for. Nothing seems right. They are treasured and I will be leaving them till quite late in the stashdown, awaiting some kind of life altering inspiration I'm sure.
My first skein is one of these yarns. I received this beautiful skein of Julie Spins Merino 370, a fingering weight from a friend who actually, has a habit of sending such stunning skeins that I then precede to have a meltdown over when trying to match them to projects. That sounded ungrateful; I AM NOT. I just look at at the skein, photograph it, pet it and whisper 'what will you be?' to it. I'm met with what I feel is a quite judgemental silence. These reverred skeins can be quite aloof eh?
Let us pause and just look at this skein. 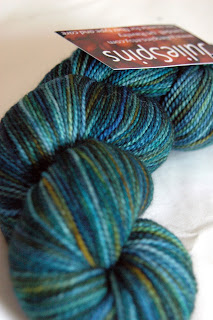 Isn't it beautiful? The colourway is Banff and what I can't work out is: is this going to come out decadently variegated or become some multi tonal blue that makes me weak at the knees? I know, I could check Ravelry, but alas, no FO pics. I could swatch. But then I'd have COMMITED to the skein and as I mentioned, it's quite judgemetnal of me already.
So now onto the tale of the second yarn. It would be cruel to make a comparison. It'd be like comparing a new F1 team with Maclaren (the season just started, expect lots of F1 references). Instead, I will tell you a story that proves why I should not live in fear of 'too precious skeins'.
I am a relatively new knitter, only two years really. I went on a yarn crawl with my newly found knit group a few short months into knitting. I was bullied by an overzealous sales assistant at a fibre event which led to me falling in love with a grey and white skein of fingering, Aspen Moon superwash to be exact. I thought it was exciting, a far cry from the discount balls of Sirdar I'd been practising on. 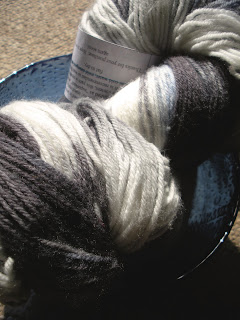 I was nowhere near making socks and I didn't have a clue yet about shawls so it sat, awaiting a project for over a year. I eventually found it a partner and gleefully decided on a Daybreak by the yummy Stephen West. I got the ball winder out and swift and prepared to be dazzled by it's colour as I wound it. 24 hours later, I had a killer hangover and a half wound tangle..... I'm not saying it drove me to drink but it didn't help me stay sober. Two friends had helped unwind this mess and it still sat on the swift, taunting me. Admittedly, they'd shared in the drunkeness too but I was convinced the skein knew what it was doing. It had MADE us get that drunk.

The DayBreak did come out beautifully but the yarn was nothing short of disappointing. It was soft but probably too soft. Socks would have laid down in submission and died to be honest. This doesn't mean I'm ready to say I've learned my lesson and wind the Juliespins, however. I mean, not before I've emptied my house of alcohol anyway....

Email ThisBlogThis!Share to TwitterShare to FacebookShare to Pinterest
Themes: 2KCBWDAY1

Mmmm, beautiful. I hope you find its project

Fabulous, well done and yes your tagging is fine thats all i did was add it as a label

I know what you mean about yarn that hates you. On numerous occassions my OH has looked across at me and said "I thought you liked yarn - are you crying?" I wish I could drink, but my drugs wouldn't like it very much, alcohol would soften the trauma of winding yarn.

That Julie Spins yarn IS gorgeous!

There are lots of "sock" yarns that seem better suited to shawls or other soft things that won't get as much hard wear. It looks like Daybreak was a good choice for that yarn!

I just wrote a post the other day about not giving up on yarn. I had this strange blend of several colours in my stash that I thought would look terrible when knit up, but then I started a project from it in garter stitch. And lo and behold - while I hated it in stockinette - garter did magic to it! There are so many different stitches out there and so many different ways to knit (in the round, in small or large circumferences, back and forth...) that it makes me think that there IS a stitch and a method to make every yarn look good. Now, whether I'm willing to put in the effort of possibly ripping it five times before I find THAT stitch, that's a whole different matter... ;)

I'm seeing so many gorgeous yarns in this sort of lovely bluey-green colour today. I can see my stash expanding rapidly after blog week is over!

That grey and white skein makes my head hurt all over again. *goes cross eyed*

Wow that Juliespins is amazing! I have some Madeline Tosh in a similar color that I don't know what to do with yet. It's just too precious to mess up.

I blogged about my skein of yarn I can't knit yet. I think I'm not worthy of it!

Your post reminded me of a couple skeins of lace weight I have lying around, so I had to blog about them. :) I don't know why some yarns have to be SO pretty!

beautiful yarn. hope you find a project that matches its beauty...

Your post reminds me of why I stopped buying beautiful yarn the minute I saw it. I had too many skeins just sitting around and I could never find the perfect project for it. Now I plan ahead and only buy if I have a project in mind. So terribly boring, I know! But yarn sitting around stressed me out too much.

DO IT!! Whatever you make will be awesome.

See and I'm under the impression that I need ALL the yarn out there!

The blue yarn is gorgeous! I'm sure it will look amazing when you knit with it!