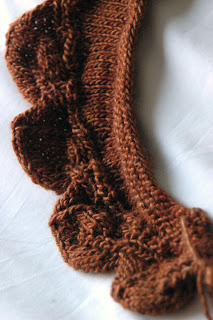 Anyone reading my blog would be mistaken for thinking I have given up on knitting. I haven't. It's pretty much consumed me if I'm honest.
It all started with Spring Leaves. Man beast's not-so-evil step-mother is turning 60 this month and she's always been lovely, supportive and so enthusiastic about my knitting. It seemed only right to knit her something and a lace scarf or stole in pretty purple was decided upon. Yes, there was only 6 weeks or so but I could put my other knitting aside and focus on some 'quick lace' surely?
We went to Loop and while I was cruising for something silky, Man Beast picks up Wollmeise and says 'This one'. I love his taste. It started off life as another project that shall remain nameless. I am planning on tackling it again with a longer time frame for another milestone birthday at the end of the year. I won't mention it here then, in case it hears I'm displeased and punishes me later.
Anyway. Spring Leaves is a nice repetitive pattern. You knit in two halves which involves a provisional cast on.... and picking it up. I was so worried about messing up my knitting at the half way point that I didn't anticpate the bind off problem I had. I tried the EZ sewn bind off. It seemed so simple. It reminded me of kitchener stitch. And that's where it all went wrong. I pulled it tight, as if I was grafting a toe. I wasn't. I was binding off lace. 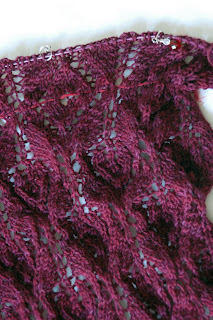 Yesterday I performed major knitting surgery. It was epic. I'd removed the lifelines, thinking I was done and so I had to pull out the bind off and stitches were dropping everywhere. You could have heard a pin drop in the flat but for the tinkle of a needle being dropped in favour of a crochet hook or vice versa. I saved it. AND I have the provisional cast on all sorted. See? That's me moving onto the second half. Phew.
To avoid complete lace overload I've been popping back to the Cedar Leaf Shawlette every now and then. It's at the leaves point and I'm glad to have something to break all those leaves up too. The yarn is Sanguine Gryphon Codex, a delicious blend of merino and silk. This plump worsted is probably one of my favourites. Compared to the slightly tough quality of the Wollmeise, it's a dream to run through my fingers.
And then there's baby gift knitting. Everyone's pregnant. No really. In the interest of keeping up, I have a baby knit on the go all the time now. It would start rumours if it weren't for the fact I'm so clearly too scatty to have a child..... 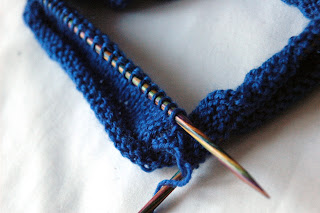 I know what you mean about everyone being pregnant. In the space of around 3 months I had 7 births to make gifts for SEVEN!!! The only thing keeping me going was that surely everyone who might have a baby now has one so I've got at least 9 months before they start again.

So true everyone is pregnant. Even if you weren't the ladies I work with could start the rumors fast enough...

I know it's Spring and it's been a cold winter but I keep thinking 'Is it something in the water?'