I took a picture a few days ago that I promptly deleted 5 minutes later from my Instagram feed. It felt like too personal a picture in some ways, too full of meaning and yet, it also doesn't mean a thing to anyone else but me.

Want to see the picture? 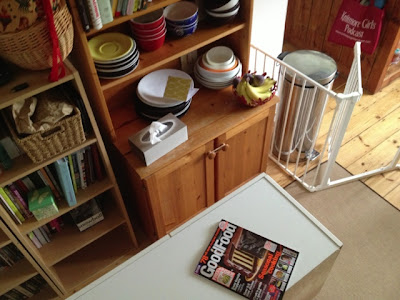 See? Nothing too worrying there other than some clutter in the middle if our living room. They say a picture can say a thousand words and this one has plenty. It's the meaning behind it that caused a friction inside of me about how much I wanted to share and what I think I want to write about now that I've started documenting moments like this in my life.

Firstly there was a sideboard in the middle of my living room. It's a lovely white side board that a fab friend rescued from being dumped and other friends brought to live with us. It sparked a cascade effect....

When we moved in just over a year ago, I had visions of lovingly creating a home for the Playful Baby to be welcomed into. I would sand down and paint this shabby dresser also captured in the photo. I would knit cardigans for her for each season (note the cluttered knitting baskets). Our house would be a calm and creative place.

A year later the dresser is fine as it is, thank you. The cardigans? No. The sideboard? Helping to rehome various things that means we can finally get the last boxes unpacked. Yes, a year on we are still unpacking. Mind you I should explain a little more. We have packed and unpacked a grand total of EIGHT TIMES.

Our lovely house sprang leaks and we needed some pretty major bathroom sorting before little one even arrived so we unpacked and repacked as builders came and tore down and plastered and tweaked. In the meantime I went in to hospital and held tight- this was one impatient baby! Our little home was suddenly a cause for huge anxiety and we began to panic that we might bring our baby home to rubble!

With the support of wonderful friends and family we were ready just in time for the Playful Baby's early arrival and we hoped to restart on other work once we got the hang of things a bit. In the meantime we set about learning how to best care for a rather active and curious little one. It wasn't calmer but it wasn't rubble that's for sure.

Leaks have an annoying habit of causing damage and worse still, returning. Then there's the neglected hardwood floors that suddenly I decided were a 'death trap' the minute little one got remotely mobile. Suddenly we were back into this urgent state again and what's more with a baby. As combinations go, I can assure you, this is not a great one.

So the end result has been 8 sessions of packing and shifting of furniture and please let's not forget the clean up operation every time. It's been quite a year.

So we stand at a point where I have declared my sanity can only be saved by unpacking every last box and finishing house projects for 2013. This sideboard meant we now have a functional living room and in turn the loft room can now be sorted till a time when we have the time/ energy/ funds to address it fully. In the mean time, functional will suffice. Cardboard mazes won't.

That magazine on top of the sideboard? That's me planning for playful times: baking and cooking. Food remains a tricksy issue with PB still struggling with a poor digestion when it comes to dairy. We're getting there and now I'm testing the waters for us both. (Not rewarding myself with super ice creams has been tough, let me tell you).

So this picture tells a tale of a playful woman pushed very hard this year. That's why it felt raw and weird and not really blog worthy. I'm sharing it anyway because you know what? It IS personal........ it's either me or those flipping boxes. Today, I'm going to unpack another. I AM!

Honey, I feel you. When we moved into my grandparents' house in 2009, we had to contend with not only our stuff but my mom's stuff and my grandparents' stuff. We lived there until the spring of 2012 and that was when I was forced to go through everything and pack it up, donate it, or toss it because we moved across the country. All our stuff wouldn't fit in our apartment so we had a storage locker for about 7 months...and then we bought our house this past February and all our stuff came from storage plus anything we had accumulated plus new furniture to replace stuff I had given up when we moved.

I still have a stack of boxes in the front room to deal with. Otherwise, everything is unpacked....notice I didn't say organized. The only organized space is my yarn closet :)