In the run up to Christmas last year I plotted hand knits for loved ones and assigned yarn and patterns. I mostly hit the stash as shopping from my own private collection is very satisfying indeed. The only new yarn I purchased was some aran weight for my Dad's handwarmers and some beautiful worsted weight from The Uncommon Thread.

The handwarmers were easily finished, running smoothly and without problem. However, the TUT had other ideas.

The base is Ce's beautiful MCN 'Lush Worsted' base, a squishy mix of Fibers 80% Merino, 10% Nylon, 10% Cashmere over 230 yards. I chose the 'Bois' colourway to show off an ambitiously cabled pattern. What? You can see a problem already? Yes. Quite.

The pattern I had chosen was Dryad by my knit crush, Jared Flood. It is a beautiful collection of cables and twists over a long, long scarf and the giant, its intended recipient, seemed very pleased with the idea. It was knitting destiny. It would be beautiful.

I cast on late in the year for such an ambitious Christmas present. I gleefully told myself that this would be what I knit during the 'nesting phase' of my pregnancy. You know, the bit at the end where all you do is sit around knitting and creating while your due date looms? Yes, you're seeing where this is going aren't you?

My baby was quite impatient and arrived 2 weeks early which was certainly better than the 7 weeks early arrival she originally tried for. It was joyful but complicated cables only 2 repeats in were just folly.

I stayed with the Jared Flood theme though and picked Setzer. Welts and short rows, what could go wrong? 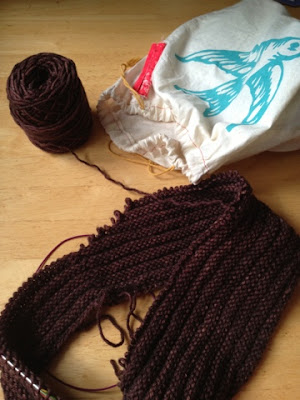 Ah yes. About those short rows....


I have only just finished the cowl and still have a whole skein and a half left of the original yardage to turn into matching mitts for the Giant. I'm really pleased with the results and as soon as I find a moment to block it and snap it, I'll share the results.

Sometimes you just can't argue with destiny can you?
Posted by A Playful Day at 20:52