A non-resolution check up

This New Year I opted for goals that would generally make me happier as I'm not a fan of resolutions. I'm not very good with being told 'don't'. The minute I hear I can't touch wet paint I'm splodging finger prints in it or trying to trick someone else to doing it too. It's just the way I'm built. 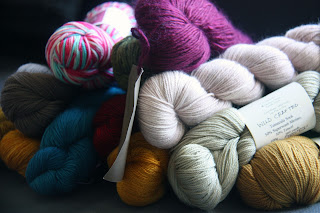 Highs: The Hungers Games, Elizabeth Zimmerman and The Moomins

The Lows: A badly written Judy Garland book that was only saved thanks to great photographs being included and the third book from the Hunger Games trilogy. It seems impossible to capture the momentum of the first books and while it wasn't a stinker, I wanted to be gripped as much by the third as I was by the first.


Finally, I need to declare to the world that I love Elizabeth Zimmerman. I love her writing style, her attitude to knitting and her humour. Heck I just love her ok? I want to read all her books. NOW
Posted by A Playful Day at 15:16

I don't have "Knitting Without Tears" but I do have "the Opinionated Knitter". It's well worth picking up. She's so funny and snarky.

I've read about half of "Knitting Without Tears" and she just cracks me up. She says things so matter-of-factly but things that are a little.....off. I don't know how to explain it but you've read it and you know what I'm talking about.

I picked up "The Opinionated Knitter" last week and haven't started it yet (though I have a pattern from there that I need to make).