The day my world stood still

I've been lacking inspiration for the blog of late. I sit and nothing comes. However, I just got back from going to seeing Senna and I found words (Despite, actually feeling quite speechless). So here's my review and why this was a film that meant an awful lot to me. 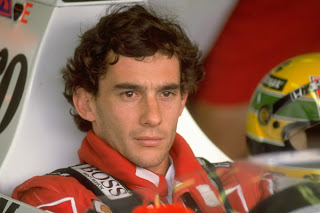 I am left feeling happy and broken all at once.

It was amazing to watch (one of) the greatest drivers of all time once again. Seeing him smile, watching the moves that made him the best was like a return to my childhood. I remembered the thrill of his tenacity and how I wanted to be as brave and focused as he could be. I was suddenly 7 again, watching with my dad and adoring this young brave hero.

Of course, with this film there was the inevitable. The year ticked to 1994 and I started to struggle to breathe. The practice where Rubins was lucky to walk away, the qualifying where the newbie died; it was gut wrenching. I knew the corner. I knew when it was coming.

The best part was seeing the footage of Frank Williams and Ron Dennis in their hayday. I remembered how playful they could be, the raw genius and talent. They changed epically from that moment. I don’t think Frank has ever really recovered. His F1 career has been monumental but the level of tragedy he has personally shared could only be bourne on shoulders as wise as his. He is a true living legend.

This film reminded me I have a deep connection to the F1: my father. We sat stunned when Senna was denied the championship- screaming with rage at the delayed podium and the clear understanding that Prost had formed an unholy alliance and Senna was about to be unpleasantly taught the politics of the F1 scene. We were shocked to the core by his death. When my dad nearly died after a freak accident a few years ago, 6 months later we walked around Silverstone then watched Jackie Stewart drive his car round the track. I looked up at my Dad and said ‘I love you’.

This film reminds me that no man can replace my Dad or make me not want the F1 anymore.
I’m watching the next race with renewed love for a sport that I grew up watching. With my Dad.

I saw Senna on Friday, it was a beautiful film. Senna is certainly missed from F1.

I find myself smiling whenever I watch Hamilton breaking late though. He grew up with Senna as a hero and it shows in his racing style. His legacy lives on.

He is missed my dog is called Senna after him :)