While writing a new blog post, I realised that I never hit publish on this one! So today I will, despite being out of date because I took pictures and everything!
It's been that kind of month where I keep making silly mistakes like this.
So I wrote a little while about my knitting intentions. I queued, I read up on notes, I organised stash and needles. Did I cast on anything I'd originally intended?

In my obsession with using up stash (and thus getting the count down on Ravelry entries- one of my favourite games), I cast on some mini socks with the Trailing Clouds leftovers. Stripy mini socks are just so cute. I have NO idea if I will have enough but I figure with this colourway I could just add some scrap and it would just add to the big colour adventure right? 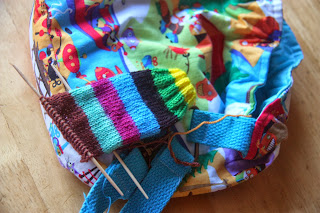 The pattern I'm using is from 'Tiny Treads' by Joeli. This book is chock full of mini people patterns for mini feet that I just think are great. What I particularly like is that you base your knitting on the gauge you're getting but the maths isn't confusing unlike lots of other similarly written patterns. If you're in the habit of swatching you could even check if you were going to run out of sock yarn or not. Did I swatch? Ahem......

I also cast on Knit Night which I DID intend to do. Ha! This is part of the KAL I'm helping to host in the Fyberspates group and I'm really enjoying. I haven't joined in or participated in a KAL in ages and I doubt I'll get this finished but the knitting is soothing enough that I'm not stressed by it and the yarn?

I've never worked with singles before and I wasn't sure if I would enjoy them. It does slightly take away the autopilot nature of the knitting as the finer feel to the yarn means I have to look at my knitting more often than I normally would in garter stitch but when you're looking at something this lovely, who cares right?

I have new baby knitting plans but I'll talk about those when I actually cast on or figure out which direction they're going in- I'm designing on the fly again. Oh and this? 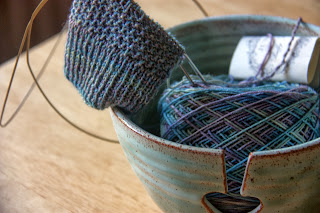 The yarny goodness in the last photo? I want.