Well.... I'm clearly not meant for playful things lately and despite promises to jump back into blogging more frequently I've failed. Instead I'm sticking my fingers in my ears and singing loudly. If you've left a comment lately, mailed, pm'd or other please don't take it personally that there's been a lack of response. I'm mending. It's now a verb to describe moi. Even the giant has had sparse contact but then he has this habit lately of putting oceans between us. I'm trying not to take it personally.

I appreciate the contact, I really do, I'm just not very good at returning it back right this minute. I mean, it's not like I haven't TRIED to be playful. I did a mini yarn crawl with girlfriends that included Superknits and cocktails. Yes, cocktails. Well, it was cocktail rather than cocktails. I know, everyone is starting to panic at this point as cocktails usually fix everything. Also a paracetemol and tea according to my Nan.
I have made a new friend though. A special friend. In my hellish job there is a kindred spirit and it made me smile. Then I returned to stomping and railing against the lack of justice there is where I work.

Then I tried yarn. Just look at the goodies Amber sent me. YES. But I have placed it in the favourite yarn basket (don't judge me for having one of these, I know you do too) and returned to gift knitting. This shall be saved and I don't know what for yet AT ALL.It just sits whimpering at me as I walk past it in it's basket.
Then there was the winning moment when I left the green grocers, laden with autumnal goodness and realised that the local library IS open on a Sunday. I skipped in (gingerly as I was laden with goodies) and found.... MY FAVOURITE COOK BOOK. Oh Nigel, how I love you. But have I cooked from it yet? No. Have I even read it? Erm... no. 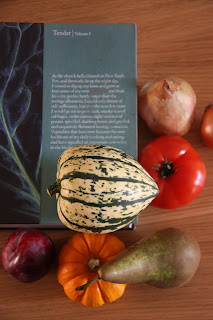 So I'm decidedly out of sorts. The best news was that today, my beloved hand made project bag that I lost on the underground was found. I truly skipped to the office and informed the nice man at the window that he was a fairy godmother and hugged my bag, openly and unashamedly in public. My knitting project was still there. My signature needles glistened invitingly. 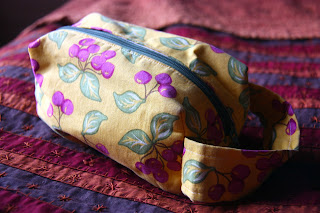 But did I knit?
No. I came home and worked on a report for work.
A very UN playful response if you ask me.
Posted by A Playful Day at 20:09

Oh that is such, such good news about your project bag! Yay!
I am sorry you have been feeling out of sorts - I do hope writing this will hep you get it out of your system, and that you will start feeling your own lovely, playful self again soon. :)

Great news about your project bag!