A change will do you good 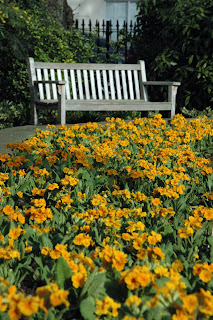 What's this? Oh that's my new knit spot. Isn't it pretty? Yesterday, the rain FINALLY lifted and I walked out to meet a girlfriend for cheap lunch. I spotted lots of early signs of Spring and even put on my sunglasses. I felt a shift in my apathy, life was good.

So I scooped up my lace project, Spring Leaves, and popped back out round the corner to Canonbury Square. (I'm going to warn you now, a very smug paragraph is coming up). The thing about where I live in London is that I'm surrounded by the most beautiful houses, parks and shops. Everything is individual and full of character. Having moved from Canary Wharf where there is a tower sucking up the souls of any life around it, its such a happy move. Canonbury is also very historic and I tried to capture this while I paused between rows. I noticed another knit sib in the opposite square and smiled across. Neither of us spoke, we were just content to acknowledge our smugness at knitting in such an awesome spot and carry on.

This plaque says 'George Orwell lived here'. (Excuse the bad photo, I really was too lazy to stand up and take a better one). There's another one round the corner for Evelyn Waugh. Again. where I live has lots of blue and green plaques commemorating famous people. Islington has always been 'artsy' so I often just wander about, looking for plaques and peering in little gated gardens.
So there I sat, feeling content, knitting at last after another knitting funk. All around me were signs of Spring and I tried to ignore the fact we've been predicted another cold blast next week. It doesn't matter. I have this. 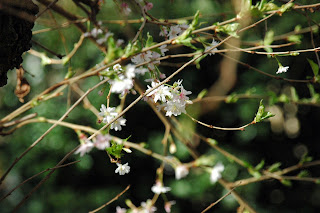 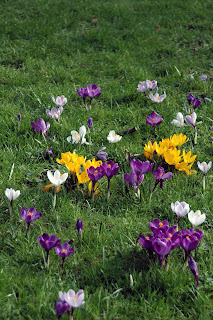 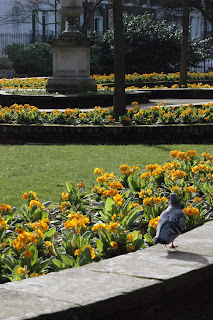 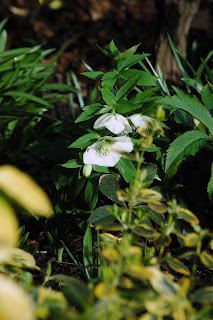 ppppsssstttt..... a note on the damn pigeon. If you ever come to London and are sucked into one of those stupid places where they sell feed like Trafalgar Square then want to take your picture, DON'T. They are flying rats that are destroying our lovely buildings. It drives me nuts that people feed them.

How wonderful you have flowers already. We only have green shoots. But it was so lovely yesterday getting out in the sun. I feel so much better after my Winter hibernation. I know its going to get horrible again, but for a few hours I got to pretend it was Spring.

This really makes me miss London; and I really look forward to visiting your new hood! Most importantly, I too despise pigeons!

It was almost like it was Spring. I felt a little sad for the weaker looking buds and wanted to tell them to hide as there was more cold on it's way